I know we have lots of excuses.  Two moves in three years.  Tiny basement.  Three babies.  Who grew into three kids.  And insane grandparents who spend far too much on toys, etc.  But however it happened, we kinda turned into hoarders.  We aren’t collectors of antiques, we don’t have newspaper clippings or mass amounts of old photos.  We aren’t even sentimental.  We don’t have twenty-seven cats.  Our yard is clean, our home is pretty clutter-free most of the time.  But our basement looks like it could be the season premiere of Buried Alive.  It was bad.

I am sharing because my goal through this blog was to ensure that any Mama who read this would feel like there was another Mama out there who let her know she was not alone.  Not alone with the struggle of trying to be a good Mama everyday and still feeling like you fall a little short.  Not alone with the exhaustion, tantrums, and anxiety of getting out the door.  Not alone with the basement packed floor to ceiling with shit.  Shit that you shoulda got rid of a long time ago.  Shit that you were only going to store down there for a little while.  Shit that you’re never really going to use but that you aren’t quite ready to part with.  Shit that reminds you of holding your babies when they were babies- and couldn’t yell at you.  Shit that reminds you of your life before kids- you actually had friends who you could “hang out” out with- who you didn’t have to talk about feeding schedules or diapers.  Or poop.  People with whom you could spend hours of time, without even mentioning soccer schedules, bus routes or which books eight year olds are into.  And did I mention that you can have these conversations in increments of more than three minutes in the parking lot with a crying child on your shoulder and another weaving through the parking lot like it’s a suicide attempt.  Seriously, you had friends like this.  I digress.

So the shit piles up and you watch it.  The stacks grow before your eyes and yet, you let it happen because you know you’ll get rid of it just as soon as you have the time/energy/stamina/motivation to go through it all…  I watched it pile up for the last seven years.  This is embarrassing and if you can eat off the floor of your basement, this probably isn’t the post for you.  A friend recently told me that she thought my blog was brave… And I am feeling pretty brave (or a little tipsy) tonight.  Here’s my basement…  Before.

Holy shit, right?  I know.  I went through every one of those f-ing boxes.  And some had mouse poop in them.  (See again with the poop conversations.)  Some of the cardboard boxes were a little mildewy…  I know who puts cardboard on the floor of a 145 year old basement?  But remember, it wasn’t going to b there for long…  This is my basement… Now. 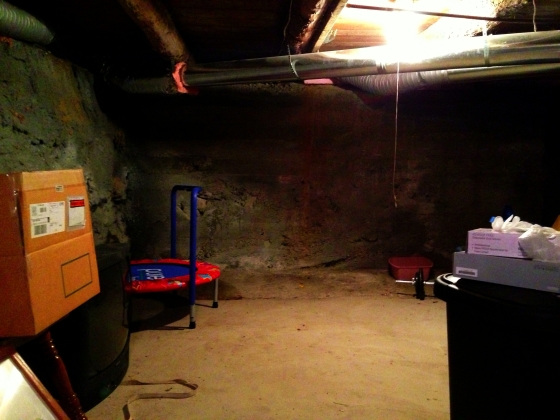 Impressive, right?  I know!  So where did it all go?  Ahh, you know where it all went… To the garage!

Utterly ridiculous, right?  I know.  So we had a yard sale this weekend.  And a couple things happened.  1. I got rid of a lot of shit.  2. I made a fair amount of moo-lah.  And 3. I discovered that the vast majority of the people who attend yard sales are weirdos.  For real. Or maybe it was just my yard sale, I don’t know.  I talked to more nutty people in a 48 hour period than I have in a long time.  Remember, I am a social worker; I know a lot of fucked up people.  They flock to me, in fact.  So, here’s my garage… Now.

Ahhhh… I can breathe.  And I didn’t need all that stuff to remember my babies as babies.  I still have them.  They act like babies every damn day.  I don’t need a box of shit in my basement with mouse poop to remind me of the life I had before I had those babies because I still have most of those friends and I have new friends.  Friends who hug me even though I have puke on my shirt, friends who listen to me complain about math games, shin guards and bedtime routines.  Friends who drop off a bottle of wine when my kid has his eighth go-around with the stomach bug (and these friends can purchase that wine legally now).  I don’t just like my life now, I kind of love it.  And now that my house is not being swallowed in shit, I can enjoy it even more.

Every man dies. Not every man truly parents.

The life of me

Turns out, it's not the hardest part.

In the not-so-distant future, you'll wish you wrote down everything your kids said. Now's your chance!

Running ramblings from a wife, mother, and treadmill enthusiast.

Traveling the beautiful and often bumpy road of life

Negotiating Childhood for the Second Time

One For The Honey